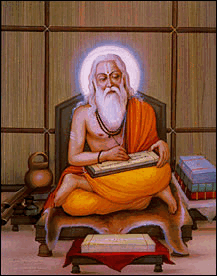 Shiv shutras are believed to be originated from Shiv's Tandav dance.

At the end of His Cosmic Dance,
Shiva, the Lord of Dance,
with a view to bless the sages Sanaka and so on,
played on His Damaru fourteen times,
from which emerged the following fourteen Sutras,
popularly known as Shiva Sutras or Maheshwara Sutras.

The beauty of the Maheshvara lies in the fact that there are masculine as well as feminine vowels, which are not otherwise found in other non- Sanskrit based grammars. Vak is the Absoluter Brahman, revered as the Shabda Brahman and vowels are in the form of Purusha and Prakriti.

Panini has taken the Maheshvara Sutra as the bed rock of Sanskrit grammar. He devised the scientific methodology more or less mnathematical in spirit with little formalization and computed it with his genius. Virtually, Panini was a marvelous Grammarian the world has ever produced. Had he lived in this scientific age of information and technology, he would have made the computer language easily accessible to each and every one.

Ashtadhyayi is known as the linguistic computation. It is comprehensive and rule based . Hrisva is single unit of speech, Dhirga is the double unit of speech and Plut is the triple unit of speech. A+ A= AA, I+I= I I/E, U+ U= U U /OO, Ri + Ri = Rii/ Ree.

The Sandhis or Joint or junction is invariably employed in the sentence, e.g. in the Swara Sandhi,. where vowel is joined with vowel.

In case of Visarga Sandhi, the difference is observed as:

Kah + Tvam= Kastvam It is just like the unit and set theory of mathematics. Panini knew the human anatomy as well and made use of all the mouth organ for the usage of the speech e.g. Akhu Visargajanyanam Kanthha , which means A Aa Ka Kha Ga Gha Ha and Visarga is to be spoken with the throat ,while Ichu Yashanam Talu, which means E EE , Cha Chha Ja Jha Ya Sha will be sounded with palatal . Ritu Lasanam Danta , which signifies that Lri Lrii Ta Tha Dha Dhha La Sa is to be spoken with the teeth . These are some of the examples , which Panini evolved. Since he believed that each phoneme is the sound body of the Absolute, therefore, the Absolute is known as the Shabda Brahman. The primal manifestation is the Sound AUM, with its application in the VARNAMALA, which is the cyclic order of the universe.

It is true that SUTRA, which got vibrated into Shruti, is the only valid source of knowledge regarding the physical and transcendental truths, but the communicative curve within that orbit is Shabda/ Akshara or the Primeval Word. The same Shabda is revered as NADA in the Trika Darshana of Kashmir and Tantra Shastra. The Brahma Sutra glorifies it as the Shabda Brahman and the Bhagwadgita identifies it with AUM/ OM the EKAKSHARA BRAHMA.

Email ThisBlogThis!Share to TwitterShare to FacebookShare to Pinterest
Labels: व्याकरणम्